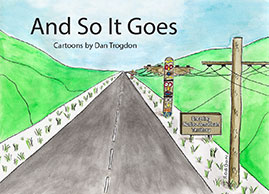 In the early 80’s, I had an immense interest in comedy and humor and worked at coming up with ideas that I thought were funny.  Unfortunately, I didn’t know how to draw, and without an outlet, I decided to not pursue it any longer.

In 2008, after years of not writing, I wondered if I could still come up with ideas.  After just a few weeks, I was pleasantly surprised to find that I could.  But there was still the problem of not knowing how to draw.  So in January of 2009, I sat down with a pencil, paper, and an idea, and began the process of teaching myself how to draw.  It was painful at first because I knew how bad I was, but slowly, over the months, I began to see improvement, so much so that I started to think that maybe I could actually do this.  It’s still not easy for me, and I know I have a long way to go, but at least I’ve learned to draw well enough to get the ideas across.  Now I have my first collection of cartoons, and I’m very happy about that.  Thanks for taking the time to visit my website, and I hope the sample cartoons will cause you to want to investigate further.